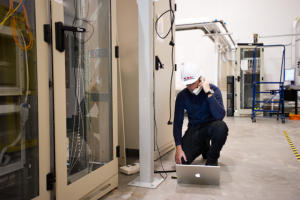 JANUARY 23, 2018 — It’s been said that if you love what you do, you’ll never work a day in your life. Dr. Michael Landry [PhD/00] is a testament to the truth of that concept. Current Director of the LIGO Hanford Observatory in Richland, Washington, Landry still thrills to the memory of the two most exciting discoveries of his career as an astrophysicist. “[They} were the twin ones of 2015 and 2017:  GW150914, and GW170817. The former was the first direct detection of gravitational waves from a binary black hole merger on Sep 14, 2015.  That day was thrilling, and remarkable. It took months for the collaboration to convince ourselves we had real astrophysical event in the data, but a first look at the spectacular chirp in the data gave me goosebumps. I thought that event couldn’t be topped, but the binary neutron star detection of August 17th, 2017 matched it. This event included matter (black holes are objects of pure spacetime curvature, and have no matter), so the collision produced not just gravitational waves, but electromagnetic ones too, light and gamma rays and radio waves, and everything in between. About 3,500 astronomers around the world followed up this event, largely in secret, until it was announced Oct 16th.”

For the uninitiated, Dr. Landry explains the basic concept behind gravitational waves:

“People normally think the vacuum of space as having no properties whatsoever: just a canvas on which the universe plays out. However, that canvas, the medium of space and time itself, can be stretched and squished.  Things that live in the canvas go along for the ride, producing length contractions and expansions.  Gravitational waves then are the squeezing and expanding of space and time, and the force-carrier of gravity throughout the universe.”

From 2010 to 2015, Landry led the installation of the Advanced LIGO detector at Hanford. The entire project was a collaboration of two groups of scientists from around the world, totaling over twelve hundred people. Referred to as the LIGO Scientific and Virgo Collaborations, they eventually led to the first direct detection of gravitational waves from a binary black hole merger. This discovery (announced February 11, 2016) led to the 2017 Nobel Prize in Physics for the groups’ original lead scientists. Does keeping such distinguished company encourage Landry to work harder?

“Well, no, really.  The best leaders motivate you to work harder all along the way – so Barry, Rai, Kip, and other LIGO people did this long before 2017, and for many of us.  Plus, I already had fantastic examples in hard work from the group at [the] UofM and TRIUMF:  folks like Wim van Oers, Larry Lee, Des Ramsay, Shelley Page, Chuck Davis, John Campbell, and Jim Birchall. They were fantastic mentors and an extremely dedicated group.

“Lastly, I think of LIGO people as pre-selected optimists. You had to have been a natural optimist to try to detect length changes at the level of 1/10,000th the size of a proton. From that comes motivation, and some hard (but fun) work along the way.” Landry was born in Montreal, the youngest of five to his news photographer father and oil and gas company administrator mother. Although his parents were supportive, neither had a background in science. Landry points to his junior high and high school teachers as initial inspiration for his love of science.

“Frank Bruseker taught me Grade 8 Earth Sciences, including plate tectonics. The idea that the Earth could be so different, and you could prove it, was a key moment for me. Andy Orr taught us Special Relativity in Grade 11 Physics, and that cemented my interested in exotica in the universe. My interests in particles and fields and astronomy and cosmology derive from really good teachers and a few watershed learning experiences.”

At age 11, Landry’s family moved to Calgary. As the end of high school drew near, he contemplated doing either a Physics degree or following the paths of both his elder sisters who studied Phys. Ed degrees and went on to teach. Landry chose study Physics, earning a BSc in Physics and Astronomy at the University of Calgary in 1989. It was at that point that he took time off to work as a programmer analyst and LAN consultant. The money earned at those jobs allowed Landry to backpack around Asia prior to starting his Masters at the UofM. Working under the supervision of Distinguished Physics Professor Willem van Oers, Landry studied subatomic physics, focusing on strange quarks. During his studies, his experiments led him to visit both TRIUMF (one of the world’s leading subatomic physics labs) in Vancouver and Brookhaven National Lab in New York.

Having earned his PhD in 2000, Landry began work later that same year as a post-doc with Caltech, stationed at the LIGO Hanford Observatory. He’s been there ever since, working on a variety of aspects of the LIGO experiment, including interferometer commissioning at the site and data analyses in the search for gravitational waves from spinning pulsars and neutron stars.

“It’s a real surprise and honour to be named an Honoured Alumni of the University of Manitoba. I’m really looking forward to visiting the campus again and meeting with students, friends, and faculty. Furthermore, I hope to catch a Jets game if it can work out.”

Dr. Landry is one of seven outstanding Alumni being honoured at the upcoming 2018 Faculty of Science Careers in Science – Pathways to Achievement Honoured Alumni Awards event. 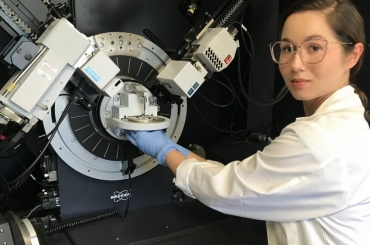