Home>understanding a complex network of factors disease and virulence

Understanding a complex network of factors – disease and virulence

“I’m the kind who, when they start something, they like to see it through. That’s just the kind of drive I’ve had since I was a little kid. It didn’t matter if I wasn’t good at something. I’d keep trying until I at least learned it, and if I liked it, I’d keep going. If I didn’t, I’d stop.”

It’s a good thing Lightly was intrigued by her topic, since her project (under the supervision of Professor Silvia Cardona) has taken nearly five years to complete. It began as an investigation of the role of a metabolic pathway in the quorum-sensing regulated virulence of a difficult to treat bacterium called Burkholderia cenocepacia.

Initially, the researchers believed that metabolites of the molecular pathway would inhibit the activator of the pathogen’s virulence, thus inhibiting the virulence of the cells. The pair speculated that it might be an optimal target for intervention, rendering the bacteria unable to cause disease. However, Lightly’s initial results indicated that wasn’t the case. Even removing the activator of virulence wasn’t enough to inhibit the virulence of the organism when the metabolic pathway under investigation was genetically manipulated.

Lightly’s findings involved making mutants of a particular step in the pathway, a task attempted unsuccessfully by three previous students. (Lightly is quick to qualify this, saying that none had access to the resources she had.) She confesses her reluctance to create the mutants, simply because others had failed. However, there came a point when creating the mutants was unavoidable if Lightly wanted to move ahead. She decided to attempt the mutants in order to prove that it wasn’t possible, then make a conditional growth mutant as an alternative. Instead, Lightly found herself successful. She had her mutant.

Throughout the course of her research, Lightly admits there were periods when she considered quitting. Ultimately, she decided to pursue her research to its logical conclusion, rather than give up or write a scaled-down version of her paper. So Lightly and Cardona continued to work through the problem, meeting regularly to discuss the puzzling and contradictory results.

“We built a model, and then every time we’d sit together and say: ‘Yes, but this doesn’t work because of that.’ Then we’d break it back down until we had a model that explained all our results, fit with everything we knew as much as it could. We finally got to the point where we said: ‘I think this explains it. This could be happening.’”

What Lightly has discovered goes against a great deal of previous research. Cardona says that others in the scientific community are also realizing that virulence is more complicated than initially thought. The paper itself, Cardona says, shows the complex network of causation with regards to virulence and disease. The bacteria involved are adaptable, and perhaps targeting just one of the components of virulence isn’t enough. She likens Lightly’s results to “the tip of the iceberg” while commending her determination to finish her initial line of questioning.

“To be honest, if Tasia wasn’t Tasia, probably she would be reasonable to give up, because you say: ‘Wow. I’ve been trying for so long. This is not working. I don’t understand my results. One day I have one thing and a different day I have another thing’. She [experienced] everything that was possible to make her give up. She continued and I want to highlight that. Those things are not shown. You don’t see them in the papers. Only I saw what she went through. You have to be really strong inside and say ‘I will continue’. As Tasia said: ‘I will be guided by my results, not by what my supervisor says or previous papers’. Follow your results: that’s my message to Tasia and all other students.”

Lightly, who will defend her thesis in the next few months, agrees with Cardona. Five years is a long time to work on one line of inquiry, but she feels that it’s been a worthwhile endeavour.

“Once we started to see ‘There’s a story here’. We could see how it was starting to fit together, and that was motivation to continue.”

Cardona, obviously proud of her hardworking grad student, reminds her of a previous conversation about the merits of Lightly quitting or going on with her project:

“Remember? We talked about it, and you told me: ‘I could graduate, because we could write a smaller version of this paper, but I want to feel like I did everything. I want a good story.’” 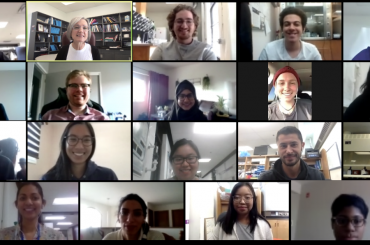