The Centre of It All:  Faculty of Science’s New Data Science NEXUS Explained

A nexus is defined as “the central or most important place”. When it comes to data science, the University of Manitoba, Faculty of Science has a new ‘important place’ of its own: the Data Science NEXUS. The result of efforts by a committee of over 20 members from the U of M community, it’s led by Director Saman Muthukumarana,  Associate Head (Graduate) and Associate Professor in the Department of Statistics. Muthukumarana was appointed to his post in May 2019, and has been hard at work since then to ensure NEXUS is a driving force in Manitoba when it comes to bringing academic, industrial and governmental organizations together through interdisciplinary data-enabled research and collaborations.

“Bringing [these entities} together will be very important in handling mathematical, statistical and computational model validations, efficiency, complexity and feasibility in complex problems. These collaborations will not only educate future generations, but will also advance the disciplines through new discoveries as we move forward.”

The NEXUS is a research and collaborative initiative whose mission is to promote and facilitate collaborative interdisciplinary research and education in data science. It aims to train the next generation of data scientists as well as inspire them to employ their talent and aspirations to solving challenges faced by our world. Through the development of programs/curricula at both undergraduate and graduate levels and the discovery of knowledge through interdisciplinary research, data scientists with various levels of expertise will be able to support both local and global industries in transforming data into useful knowledge for optimal decision-making.

NEXUS has three main objectives: to promote the collaboration of data scientists with researchers from other disciplines and with professionals from industry, community, government and non-academic sectors to solve real-world, applied problems for the benefit of society; to advance knowledge in the field of data science through interdisciplinary collaborative research and the development of novel concepts and analytical tools; and to serve as a training ground in data science at all levels (undergraduate, graduate and post-doctoral) for those inside and outside the U of M community.

NEXUS joins similar initiatives across the nation which are being developed through various existing units in most Canadian universities, including the University of British Columbia and McMaster University. In the U.S. and around the world, data science institutes are becoming the norm.

Muthukumarana says that the need for data scientists has accelerated in recent years. Experts predict that they will be in ever greater demand over the next decade. It’s not too surprising in today’s digital world, where vast amounts of data are generated and collected at an unprecedented pace. Data science is already a significant influencer in virtually every sector of the global economy. In order to stay competitive, Muthukumarana says it’s crucial to be active drivers of this change. Working together with his NEXUS team, he hopes to find many ways to make it a world-class organization in its field.

In his own research, Muthukumarana’s main focus is developing Bayesian methods and computation for complex data, which integrate both modelling and computational aspects with diverse applications. For the uninitiated, Bayesian statistics employ mathematical tools to update commonly held beliefs about random events in light of seeing new data or evidence about those events. He’s also developed methods for new approaches for non-inferiority and equivalence testing in drug development. In this kind of application, non-inferiority testing is used to demonstrate that a new drug works as least as well as a currently existing drug already on the market. This information is quite useful in the pharmaceutical industry. Muthukumarana’s work has been discussed by the U.S. Food & Drug Administration (FDA), whose think tank looks at drug assessment methods.

Statisticians have also applied his expertise to developing methods for environmental and ecological data, as well as simulation methods for sports and user behavior analytics. His research is mainly based in methods and computation coming from complex data, which brings Muthukumarana to an explanation of why he favours the use of Bayesian methods, as opposed to others.

“We are in the era of data science and big data where enormous amount of data arises in every discipline with various complexities. This is mainly due to usage and advancement of technology in every day to day activities. Big data is more about V’s: the volume, variety, velocity and veracity of data. Data science is more about high dimensional and complex aspects of structured and unstructured data. They arise mostly from a wide variety of domains, so domain knowledge is also important in analyzing messy data and need more than one set of skills to handle these real-world complex problems.

“In developing a statistical model for these complex data, we typically embody a set of statistical assumptions concerning the generation of data, either uncertain future data or already observed data. This involves linking a set of parameters to the data in a structural fashion. In a typical parametric model, we assume that data are arising from a distribution where the parameters are mostly in finite-dimensional spaces. The parameters are also assumed to be fixed unknowns.  In Bayesian methods, we assume that these parameters are random, so arise from their own distributions and parameter space can also be in infinite dimension. That’s the advantage of Bayesian methods in analyzing complex data.”

Muthukumarana is pleased to report that NEXUS already has hosted a variety of successful events already, including an international data science conference, NEXUS: Art of the Possible, held November 14, 2019 at the U of M, Fort Garry Campus. Over 300 participants representing: government, industry, researchers and students attended. The conference featured three keynote speakers, 15 invited talks by international guests, a panel discussion on creating an ecosystem of innovation, and a networking reception. The sessions focused on the latest innovations in machine learning/AI, data and statistical sciences to address solutions to some of the most pressing challenges in agriculture, business, eCommerce, finance, gambling and gaming, health and insurance.

There was also be a pre-conference workshop entitled “Tools for Bayesian data science and probabilistic exploration”; a data science student team challenge event presented by a number of industry partners; a post-conference MITACS information session; and a workshop with North Forge Technology (Forge 2019 – Applying the Art of the Possible to Finance services).

A NEXUS workshop series will run through the Fall term. Muthukumarana reports that more workshops will be added in the near future. Further, an Industry + Community Consultation is planned for February 27, 2020. The consultation will celebrate industry and tech collaboration and encourage an open discussion in terms of future directions for NEXUS. 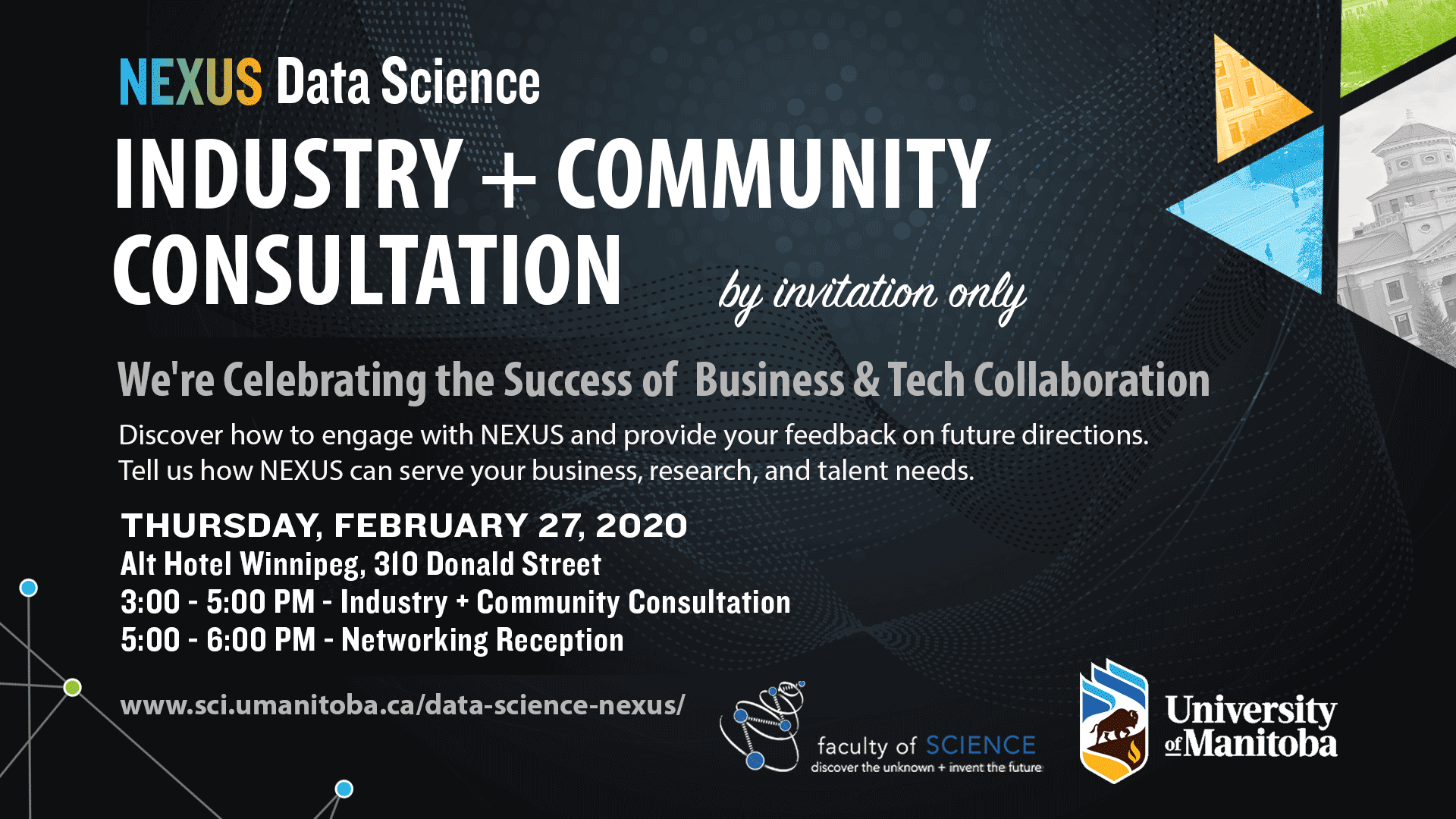 Industry and U of M collaborate to bridge data science skills gap
Feb 28, 2020