Computer Science hosts one of the largest Co-op Programs at the University of Manitoba with an average of 180 placements per year. Our program revolves around three four-month work terms per year where students are employed by companies and government departments across Canada and internationally.

The majority of our Co-op students are in 3rd or 4th year of a four year Honours or Majors Computer Science Degree Program. Admission to the Computer Science Co-op Program is based on grade point average, performance in completed second year Computer Science courses, and other factors. Normally, the first Co-op work term takes place January 2 through April 30. Students must successfully complete the equivalent of three work terms to receive the Co-op designation on their degree. Most students who participate in the Co-op Program graduate in December of their fifth year, rather than April of their fourth. We also provide the Co-op option for students enrolled in the following joint Honours programs with Computer Science: Mathematics, Physics and Astronomy, and Statistics.

Here’s what Computer Science students can do for you:

Co-op students will have completed courses covering a broad range of topics that may include:

Science Co-op students are equipped with a solid foundation of transferable skills which include:

For a detailed list of courses to learn of the areas covered by Computer Science lectures and labs, please refer to the University of Manitoba’s Academic Calendar.
Contact & Social Media
MAKE
A GIFT 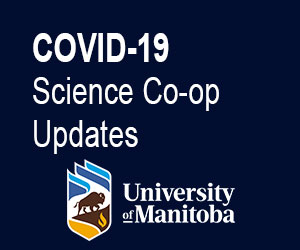